Moving on from the end of our friendship,
It is sometimes easy to look over the bridge
And look how far we have come
Before the coin sinks into the water.

Moving on from the end of our friendship,
You can count the ripples in the moonlight
Which once used to cause such a splash
Now disappear totally without a trace.

Moving on from the end of our friendship,
You can see the sunset sinking rapidly
When once we’ould painted everybody dry
Now spiral into endless decay,

Making you glad you moved away.
Posted by onewriterandhispc at 05:43 No comments:

Here are a selection of videos with the occasional song of acts I have seen in performance throughout May and June 2013.

Petrova Fairhurst –The Legend of the Willow Wight

The nearly dead poets – unwelcome in the welcome

Deslexic – I await the day

Andy N – Edge of the world with Billy Mackenzie

Jeffarama! There has to be hope!

Andy N – Conversation on the train

Andy N – kissing my every absence

Andy N - The End of Summer

Jeffarama! – we shouldn’t meet at funerals

A Means to an End - Up on the Roof

Posted by onewriterandhispc at 11:34 No comments: 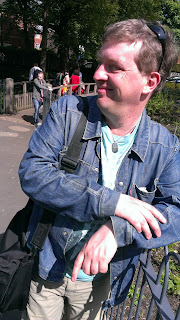 Hope this note finds you all enjoying the sunshine where-ever you are.

After some time of rain and the usual rubbish in the British summertime,
The last few days have been a pleasant surprise.

1)      First of all I attended Write Out Loud, last month which was fairly
Quiet but gave me chance to debut the day N C died, a new poem originally
Drafted during Napwrimo but finished for this and which got me a standing orvation.

2)      Not long after that, me and Manda did our last Writers of the third kind for this season on 22/05/2013 (Will re-start probably in August but watch this space). Had our biggest turn out so far for it (12 people) which was hard work to control but which was very, very pleasing and from which it looked like everybody had a great time in it. I’ve had interest from other people about the re-start, so it looks like the third season will prove just as fun.

3)      The following Thursday on 30/05/2013 as a favour for John Dawson, one of the members of the workshop, me, Manda, Rob Goodier, Joe and Martin Bailey all took up 10 minute slots at a charity reading in Radcliffe for Bury Hospice which raised just over £100 I believe. I did Longford Theatre, Yesterday, Open Door Closed, Conversation on the train and as a conclusion Hope. It was a nice night turn out of around 23 or 24, week and as the video footage proves which I am still editing I was on fire!

4)      This Monday just hone on 03/06/2013, I did another set at Poetic logic at 3MT Theatre in near Afflecks. Sadly this was quite a poor turn out, but I enjoyed myself and did a 10 minute set including the live debuts of several new poems ‘Fathers’, ‘Kissing your every scent’, a formal live debut of the day NK died and one old favourite ‘the ghost of Liverpool empire.

5)      This Thursday coming 06/06/2013 is Guitar and Verse for June where as a headline poet we will have a young lad called Barrie Schofield who is a major tip as a writer we think and a band Jeff has worked with before called Unipunk. I think on the night as a Means to an End we will be testing out a majorily revised piece called ‘Up on the Roof’ which was one of our first pieces back in 2011, and only played live once before I believe and I’ll slip in another poem too (not revealing what).

6)      After that, A Means to an End will be playing maybe 20 minutes or so at the Cadence Café as part of the Cadence Festival in Tyldesley on Saturday 15th June, and headlining Open Mind on Monday 24th June. Jeff is also doing a guitar and verse special sadly without me on Thursday 28th June. I think also there is going to be another charity do happening for John Dawson at the end of July, and the band are in action again as part of the Inspire Festival in August and hopefully Ramsbottom Festival / Salford Music Festival in September and have other things in October and November also.

7)      Had a email from Amanda Silbernagel also which was pleasing and I think our little project there will be back up to speed in the Summer now her studies have calmed down and in a ideal world would like to get a EP done before the end of Summer.

8)      I have been working on a long narrative poem with the writer P.R. Mcdowell too for his upcoming debt solo book due out in October time I believe which is taking time also but looking good.

9)      My own book ‘the end of summer’ is going slow I can be honest in admitting but I do have several new poems on the way for it, and I think it’ll be done by Spring of next year, and if all goes to plan – there’ll  be another A Means to an End book before the end of 2014 (I’ve wrote about four pieces for it and have a couple of sequences wrote for it also with Jeff and will be working on some stuff with Petrova for the book too)

Posted by onewriterandhispc at 13:31 No comments: