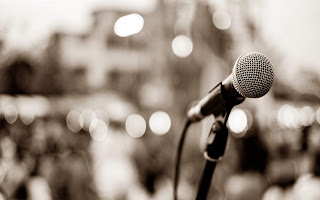 Busy times at the moment as I have agreed to start doing a semi regular column for the Sunday Tribune on Creative Writing and the few first articles I will be doing will be on lock-down and Covid 19 and how this is affecting people and their creativity. The first article on the rise of viral open mic Literature nights can be found here

Also a new Ocean in a Bottle EP / album has also been released called Isolation Volume 1 (After the Pavillion of Dreams): Embracing Silence.

Described as the release came from a review which described After the Pavillion of Dreams (which is a Harold Budd album) "Harold Budd creates a series of siren songs on the Pavillion of Dreams that shimmer like light reflected on the water's surface" Embracing Silence is a homage to those dream-like times, embracing silence taking us back to better days when things are their worst. The release can be streamed / downloaded from here

P.S. - Keep your eyes on Spoken Label as there is loads of new sessions going on there at the moment. Go here for that


Posted by onewriterandhispc at 05:18 No comments:

Reissue of my first poetry book 'Return to Kemptown' 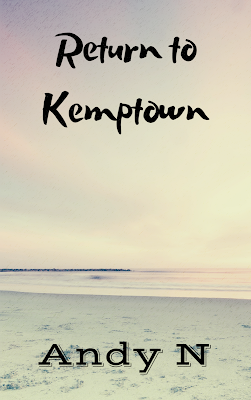 Amazing to believe, but it’s been 10 years since I released my first full length poetry book ‘Return to Kemptown’.

I remember when I produced that book, most of it was done in a mad burst of five or so months from the end of 2009 into 2010 after discovering lulu.com (A print on demand service) and was talked into doing a book. I had no real plans at that stage apart from simply performing my poetry here, there and everywhere which I was doing and just thought it would be fun to produce a book.

It was a hap hazard of starting off my publishing career and I can remember completely getting the book wrong with all kinds of formatting errors you wouldn’t believe and spelling errors that a teenage boy would have done better than what I did.

However, from that I produced a book which I regarded as a rough diamond which had pieces that I had requests to read out years and years ago including Forgotten Hero and Edge of the world with Billy McKenzie, parts of which led into what came next with my second The End of Summer.
Coming up to 10 years since I first published the book, instead of just bringing the book back into print after it disappeared. Now to celebrate its tenth anniversary, Return to Kemptown (2020) is as much a re-edit and re-imagining but an alternative look at this first book bringing it closer to what came next with his future work with rare and unreleased material from the same period. Return to Kemptown (2020) shows Andy N as a writer subtly able to slip back to the past as effortlessly as a dreamer and take it in a somewhat different direction but still reminding fresh and engaging as it did in 2010.


Posted by onewriterandhispc at 14:37 No comments:

Wall of wellbeing for Stockport College


At Stockport College, the following 5 poems have all appeared on their website 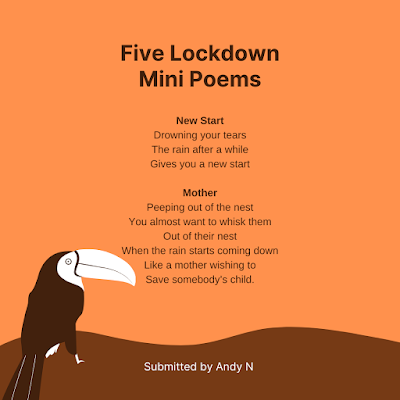 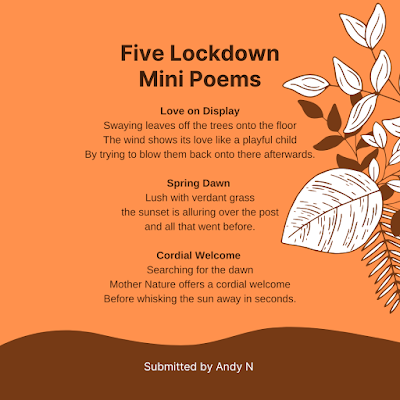 (The direct link to their website is https://stockport.ac.uk/school-leavers/student-life/student-engagement/wall-of-wellbeing)
Posted by onewriterandhispc at 02:00 No comments:

Ocean in a Bottle - Isolation Volume 1 (After the Pavilion of Dreams): Embracing Silence Coming later in May from Ocean in a Bottle

Embracing silence is a homage spread across two epic tracks (each over twenty minutes) to those dream like times, embracing silence taking us back to better days when things are at their worst.

Sample can be streamed here

Posted by onewriterandhispc at 01:44 No comments:

Ocean in a Bottle catch up February – May 2020 and hints beyond:

Global Warming on Mars 2130 is the first in a series new Science Fiction / Theory single by Ocean in a Bottle asking the simple question if mankind had to leave Earth after almost destroying our world through global warming, would we make the same mistake for example if we moved to Mars in slight echoey pianos over melting pole caps. The answer I suspect is closer to reality than we may admit to ourselves.

An experimental record label (from Russia I think) which is releasing series of short albums with various acts releasing tracks under 1 minute and a half each. My track submitted ‘The South Pole from Space’ which was a slightly different approach for what I usually do using field samples mixed with space sounds that I have been known for. A number of other tracks was recorded at the same time which may well appear in the future as a separate single.

One of the earlier singles recorded as Ocean in a Bottle in Space but has remained unreleased until now for various reasons as the release time wasn’t right. Two Orbits of Pluto is a journey of two long drones taking the listener on a sound journey of how it would feel to be going round the planet in two long drone like orbits.

Building Bridges from Mars to the Asteroid Belt

An old single actually recorded quite some time ago indeed before Ocean in a Bottle and found in a archive just after I went into lockdown a side step from it’s usual rays
Of ambience / drones into a tapestry of loops / delays with vocals and sounds to create a bridge like effect with layers and layers climbing over the top of each other until it feels like an orchestra of effects leaving you feeling like you are travelling over a bridge.

Two new Ocean in a Bottle tracks have appeared on a new various artists album from Slightly Off Kilter Records ‘Space Dust’ and ‘Asleep in Space’ available for free download / stream. Both of these tracks were tracks that I have been working on for quite some time with all kinds of layers within them which are somewhat different than sometimes the stripped down space sounds Ocean in a Bottle have become known for.

Released as part of Silber Media’s ‘April Fields’ project. 25 June 2018 Heaton Park is a piece recorded in Heaton Park (near Manchester) on 25 June 2018 live  and then remixed from the original sources to create a layer of noise over the top which was then placed onto.

I’ve been a member for a bit now of Ambient Online and usually every two months or so, they do compilation on various themes. As soon as they announced the 9th one would be on Space I knew straight away I would have to send something across and both of my tracks ‘In-between the earth and the moon’ and ‘In-between the moon and mars’ which I had just completed by chance seemed a perfect match. This is a free download and has over 70 tracks (not all mine of course) on it which is well worth your time listening to.

Bus outside playground at the end of a rainstorm.

Also released for Silber Media’s ‘April Fields’ I also did this sound journey piece recorded on a bus heading to the centre of Manchester a little while back before lockdown and was stuck in traffic in the middle of a rainstorm next to a School. The story kinda told itself here.

From Saturn to Uranus

On 13 May 2020, Cambert Electrique will release the new album by Ocean in a Bottle called from Saturn to Uranus.

Comprised of two epic, ambient tracks (which has had comparisons of Tangerine Dream meets Zoviet France in their most dissonant) this new album is more than a study of two planets but the space and silence that runs in-between them.

From Saturn to Uranus looks at the journey in-between both planets in layers of dark, drone ambience building up new emotions the more you pay attention to it. The album will be available as a free download on 13 May 2020.

Ocean in a Bottle all been well has two albums coming up for release on Off Records later in the year maybe Autumn, and I am in discussions with another label over another release. I have agreed to do another Single for Silber Media for a forthcoming project in September, maybe two.

Beside Saturn to Uranus, I’ve just finished two Eps both on the theme of Self Isolation, one containing two long 20 minute plus, the other been 7 or 8 much shorter compact songs all very much in a Harold Budd kind of territory and I don’t doubt I’ll be working on other stuff in May.

I’ve been listening to a few old projects done between 2002 to 2004, and the work done there I think I will be re-releasing a few of these over the coming months, some of which like B.A.N. or Seven Ages deserve a reissue.


Posted by onewriterandhispc at 12:17 No comments: