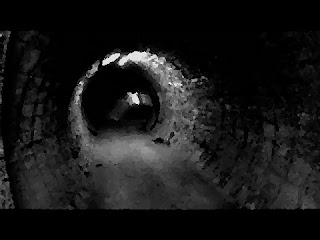 Ghost Story IV will follow on from Ghost Story I to III looking at horror over a series of at least 30 poems told in 30 days.

In previous stories, we explored horror through a tram crash in Salford where a ghost came to warn a man about the forthcoming crash to a shooter at a un-named train station and a poisoned rat king running amok, Ghost Story IV will follow a new theme and turn the volume up louder than before.

In this story, although the core characters from Part I to III will remain Andy and Michelle, a human and a ghost trapped in a whirlwind of a puzzle of a up coming un-seen horror creeping into play, Part IV will focus on a character who came into the forefront Ghost Story III right at its end, Mandrake with his war that was hinted at during Part III now boiling over and exploding from one point onto the streets and into the underworld.

Andy and Michelle will still be an important part of this story and the full narrative, as will Inspector Brooks and Ghana and all over surviving characters (so far) but Ghost Story IV will look at things at a slightly different way before spinning back into focus and dragging the reader on a gore filled journey

As always told over 30 days, Ghost Story IV will consist of short and sharp poems designed to build up the tension and by the end of the sequence will leave the reader battered to the point of exhaustion but filled with an excitement what next?

More details here
Posted by onewriterandhispc at 12:23 No comments:

Some quick notes on things that happened last year..

This can be heard and purchased from here
https://oceaninabottle.bandcamp.com/album/a-means-to-an-end-live-at-tyldesley-top-chapel-12-december-2015

Plans for 2017 are varied but will hopefully include:

(A series of epic fantasy – swords and sorcery poems set in a world which has a land called The Wall in it – the first one is now called Enemy of the Wall. All being good when the third is done – I’ll then be able to start looking for a publisher for the book and then work on the next three)

Posted by onewriterandhispc at 14:35 No comments:

A few of you know I go to Write Out Loud Stockport and always love getting the report from John Keane who runs it with his always fun write ups.

Here is the one for December which features my pieces only:

Lightening the mood, Andy gave us a remix of an old poem, a fictional thank you letter by Snow White to Father Christmas – predictably full of fun, frolics and (cough) innuendo.

Caught up in the spirit of the season, Andy read us The Snowman Came Alive, a poem vaguely inspired by Raymond Briggs’ soulful fairy tale. Sadly, the Snowman’s ruminations came to nought in the end. And we were lucky it wasn’t Simon’s Snowman…

Andy delved into The origins of Evil (with the Birth of Evil aka The Origin of Billy the Kid) with an evocative piece about a gangster in Stretford who went by the name of Billy the Kid. He ended up in Boot Hill – no surprises there, then.

Andy’s poem (From a new sequence Europa II – Part VIII) seemingly contained the deathless line ‘Moaning like Lanterns’ – a phrase worth the price of admission right there.

Posted by onewriterandhispc at 14:40 No comments: