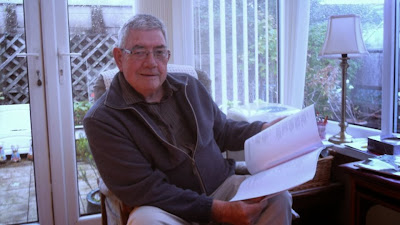 I have just found out John Dawson before, a regular member of the writing workshop I co run with Amanda ‘Writers of the Third Kind’  over the past two years or so sadly passed away on Monday 18 November 2013.

I am do not know yet what has happened here but I know he was poorly over the summer, but still managed to run the last of his charity nights in Radcliffe Hospice the other month.

He wasn’t very well that night but still managed to get up and read out a poem or two with a charm and smile that I hope didn’t desert him right up until the end that was constant throughout his poetry.

The piece below which is from a booklet of his published last year ‘thirty rhyming poems’ is one of my favourites of his and while not one of his funnier pieces sums up the way I shall miss him.

You will be missed.

A pair of slippers, an empty chair
The room now cold and bare
His coat still hangs behind the door
A stack of old newspapers on the floor
A cup of cold tea, beside his bed
A dip in the pillow where he lay his head
We had some good times grand dad and me
It doesn’t seem long, since I sat on his knee
Always laughing, and full of fun
But alas his race is run
I still can’t believe he’s no longer there
Just a pair of slippers and a empty chair.


Posted by onewriterandhispc at 13:28 No comments:

The End of Summer - delay 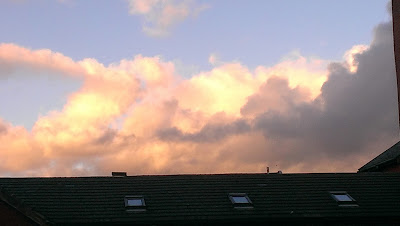 Sadly my next book ‘the end of summer’ has hit a delay folks.

This isn’t because I have hit a writers block or anything like that. The book itself is pretty well wrote aside from one final piece I have in my thoughts need a final re-drafting but it kinda made sense with Christmas approaching to leave it until Christmas itself when I can then finally look at it what to do next with it.

In the meantime, while The End of Summer takes a well deserved break other projects are bubbling along nicely.

As always including hopefully a split book with another writer and a play with two other writers.

Next week or two, I will hope to share something from the book previously unpublished.

Hope you are having a nice Winter guys.

A
Posted by onewriterandhispc at 13:46 No comments: