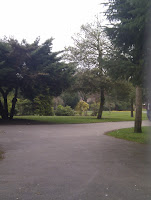 Typing this on a Sunday for once while watching
3.10 to Yuma starring Christian Bale and Russell Crowe
and rather enjoying it, but certainly I am really starting
to think Spring is in the air now.
I ended up going for a beautiful walk round Longford Park
(which has been making more and more of a appearance
in my poems recently I must admit) and managed to do
a bit of writing on a few forthcoming poems (nothing
finished however). 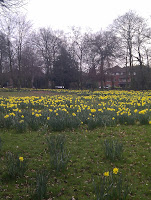 This week coming, I don’t have any plans for reading
But will be busy in creative projects work. Monday,
I will be trying to work out my new keyboard I bought
Off ebay on Saturday somewhat more still. Did a bit
Of messing around it this evening, not going to be
Easy but it’ll be fun exploring it over the next few
Months and if it works out maybe able to use in
The live A Means to an End set.
Tuesday, IT SHOULD BE band rehearsals
Where I have a rough draft of a new piece to
Consider called ‘Up on the roof’ (Strangeways)
Which is about the Strangeways riots in Manchester
In 1990.
Wednesday, I am going to pop round to see my friend
Olga over her paintings as I think she is going to donate
A painting, maybe two for the charity do I am looking
After in part next month.
Thursday I am at a meeting for a gig in July I am doing,
And then on Friday it’s my friend Zoe’s birthday so I
Will pop out for a drink or two, then head to Cathy’s
For the week-end.
All in all a busy week, no gigs or anything but things are
Building up as always – lol.
Posted by onewriterandhispc at 16:03 No comments: 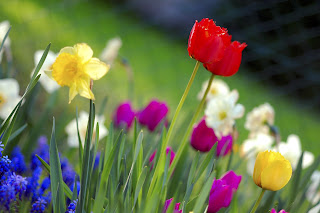 Very little to report this week aside from I have been writing a few bits and pieces.

I went to all of the readings I mentioned last week, W.O.L. Stockport was helpful
as I test ran a new major poem 'The Origin of the Kid' which I think will make it
to part of the live Means to an End set in due course and had fun with two other
pieces (one of which 'Spring is Coming' is blogged).

I found the 'Pass on a Poem' night at the library to a degree ruined by the whaffle
from some of the people inbetween the pieces, but it gave me great pleasure
reading out some Derek Jarman poetry from his 'The Garden' book which is
a amazing book about his Garden and then wandering over to Freed Up Poets
at the Green Room in Manchester. If I am honest, I was a little disappointed
with Freed Up as the audience was really down for the night, but thankfully
it had filled up a little by the time I performed where I read out a love poem
'Chamber Music XII' retitled 'Victoria Park' for the night and a piece that
means a lot to me 'Percy' which I got tons of praise on afterwards.

Spent part of the week-end at Cathy's, so on Sunday I went straight
(aside from a brief visit home) to my guitarist Jeffarama's which we had
a good jam with his tutor Dave (who I think will be joining us a part time
third member) and worked out arrangements for 'The Oirgin of the Kid',
'Forgotten hero' and a slight reworking of 'Tandle Hill', before heading over
to W.O.L. Bolton where a guy called Don parry joined me and Jeff on
stage for 'Tandle Hill' and I did 'Forgotten Hero' solo.

This week however, not a lot has been happening apart from me writing
a new poem 'Up on the Roof' (Strangeways) and a draft of a forthcoming
one 'Catalogue Number'. I've also been working a little bit on a play
called 'Night Game' which is looking promising also (More on that soon).

Gigs wise, not much happening for me for a few weeks until the next
Guitars and Verse in April, and then Cathy's Charity Do, but once they
are out of the way - May is going to be silly season as is July and possibly
September (with August been a month off).

More to follow next week of course (at some point).
Posted by onewriterandhispc at 15:17 No comments: 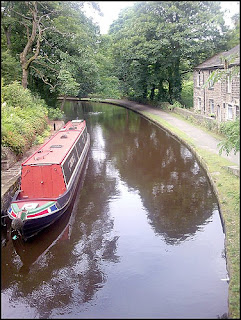 Week Commencing 14/03/2011
Spring at last is in the air, and my virus is finally starting to shift.
Spring is in the air and the skies are definitely starting to get bluer and bluer,
Even though it is still slightly cold which was a good reason to pack a light
Jumper to go to for W.O.L. – .
Considering I have been ill most of March, to go tonight wasl be a bonus for me
With several brand new pieces. I must admit I really didn’t think I would get these
Ready on any kind of level for Monday, but to get wrote what I have completed
Is a major bonus. I don’t think they are masterpieces by any stretch of thought,
But it’s a nice plus just to complete them. (Pieces were: The Origin of
the Kid, Spring is Coming and Marple Odyssey).
There was some confusion there tonight which was very annoying as when I
Arrived in the normal meeting place, there was a few people there already
Saying they were booked in the room and after some confusion they then
Went downstairs and for whatever reason several people arrived,
some of which I knew and was led to the impression that was the group
and left almost straight-away.
’s W.O.L. is a very small group indeed (9 or 10 people normally)
And to lose people like that because of a breakdown in communication
is worrying.
Rest of the week has generally been chilling as my throat still isn’t perfect
But I shall be over at Pass on a Poem again at Manchester City Library on Deansgate.tonight  and as it stands I’ll be reading a piece by
Derek Jarman on that one from his gardening book, before heading over
to Freed Up Poets @ The Green Room in to pop along to
their open mike night where I shall be reading probably ‘Chamber Music XII’ and ‘Percy’ (about my long dead Uncle).
Week-end wise won’t be much creative but I intend doing a bit more writing,
And then on Sunday night I SHOULD be at Butterflies in for W.O.L.
hindering my guitarist, Jeffarama again as normal – lol.
Must admit also I also went on a beautiful boat trip over week-end over Uppermill
Too, and it was amazing – I must admit.
Posted by onewriterandhispc at 01:03 No comments:

Week Commencing 07/03/2011
After a busy few weeks, the last few weeks in total contrast has been quiet because I have been ill.
Because I was ill, I ended up missing March’s ‘Guitars and Verse’ and also ‘Friday Night live’ Both at Butterflies in Bolton which are both run by Jeffarama (my buddy in Half Evil promotions) and in the case of Guitars and Verse by both of us and also had to cancel several other bits and pieces we were down for doing.
I have heard on the grapevine both nights went down pretty well and it’s likely I will be back on Sunday 20th March 2011 to support Jeff with Write Out Loud, Bolton where I will probably be performing there (voice permitting).
This week itself will involve a meeting for a charity night on Tuesday night and prepping for next week (Week Commencing 14/03/2011) which will be a fair enough slog all in all (as I will be at W.O.L. Stockport at Stockport Art Gallery hopefully with two brand new pieces to perform), Pass on a Poem @ Manchester City Library, then straight over to Freed Up Poets @ The Green Room (also in Manchester).
There are several things also in the pipeline / maybe’s also now – namely confirmation of an appearance at Chorlton Arts Festival in May 2011 (Date and Venue to be confirmed). An opportunity has also arisen for something at Tameside Arts Festival hopefully in July (as well as another gig I’ll talk about nearer the time) and I have also been in communications with Farnsworth Arts Festival over a possible idea over the summer.
I think Jeff my guitarist and partner in Half Evil Promotions has his fingers in a few other pies at the moment gigswise too including a possible joint gig with ‘Mind’ in Manchester a regular night which is ran at Manchester Buddhist Centre and there is defo going to be a special Guitars and Verse @ Salford Crescent in May 2011.
More to follow as usual.
Posted by onewriterandhispc at 13:56 No comments: