On the writing front, my proposed third poetry book 'From the Diabetic Ward' has gone on hold at least temporary after the collapse of my deal with Goya Press back in March. I'm not the sort of person into mud slinging but would advise anybody who has any future dealings with them to be very very careful with them. However from a creative standpoint, this book wasn't going the way I wanted it to go and therefore perhaps is best being on hold until I get it right.

Writing wise after stepping away from it, I spent the rest of this year working on the first books of two new series 'Role Reversal' and 'The Barbarians of the Wall' both of which will be out likely hand in hand at the start of 2018. (Both books have sequels already on the way).

I've also been expermenting with fiction properly for the right time also and have also a kind of autobiography on the go which is on its second draft (and is around 63,000 words) and a few novellas in two other not previously announced series (all of which are between 13,000 to 30,000 words or so currently) and have a few mini poetry collections on the go which will show up over the next few years with titles such as 'Mini Soap Operas', 'Selected extracts from the end of the World' and 'The Streets where all I saw' or 'The Birth of Autumn'.

A lot of these projects has come from simply making sure I do a bit of writing every day I can, whether it is 15 or 20 minutes every day at lunch at work or a little bit at home or at Amandas, it is simply a case of keeping active with it and keeping writing something.

Outside of that, Spoken Label (my podcast intervewing series) has progressed nicely this year releasing albums and podcasts by 23 different writers and artists. I'm currently struggling with a bit of a virus but when better by the start of 2018, I have a number of other artists in mind I want to speak to so am excited by that too.

Ocean in a Bottle my solo ambient, classical project is also developing into deeper, more emotional territories from 'Dream Frontier' and 'From Choirs to Dischoirs' – the first in two different ambient series (both series will be carrying it needs stating), Finale which was originally designed to be the final Ocean in a Bottle which then turned into the beginning of something different and eventually lead to 4 Eps in a new Autumn series. There are a few new EPS on the way which I'll talk about more when they are ready for release From Choirs to Dischoirs Part 2, a vocal led loop led experiment piece by me called Building Bridges and a new hopefully ongoing band with a musician from Brazil (more to follow).

The eagle eyed of you will have noticed the annual DIH and friends also was released at the tail end of 2017 also. It's too early to say if 2018 will result in another album but we live in hope I guess, and all being well a new live band will follow finally from A Means to an End. (Watch this space)

Concluding, I would like to wish you a suceessful New Year. In the New Year,

At the end of each year we all hug the world of its night
watching the ice solemnize the vows we make to ourselves
glistening untouched until the dawn taps above the houses
cosseting the space between the chimneys
quiet in reflection counting down the seconds
until the neighbours fireworks lace the sky
welcoming in the new year with all of its glory.


Posted by onewriterandhispc at 10:47 No comments: 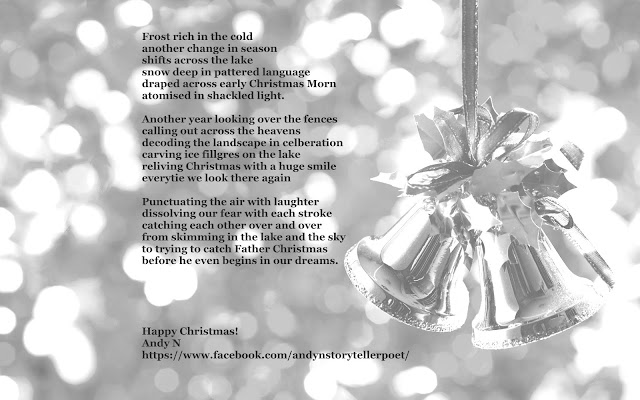 
My old friends in D.I.H. (Legendary nose / experimental terrirosts) got back together with me to do our annual anti Christmas album recently which contains the usual mixture of spoken word, classical, experimental, ambient drones and traditional songs.

Lastly, the last few Ocean in a Bottle singles have all had a autumn like feel to it (more Winter based ones will follow in January and February next year when Winter is really with us)

They can be streamed at:

Breeze across country meadows in autumn


Posted by onewriterandhispc at 03:25 No comments:

Been a bit quiet recently with submissions as I have been tied up with working on 'The Night of the Wolf' and 'Enemy of the Wall' as well as future yet to be revealed projects so it was a great pleasure to receive a notification from the lovely Marie Lightman the other week that for the third issue of her Writers Cafe Magazine has accepted one of my one
of my poems 'Skating in others expectations' (which itself will be appearing in my third full length poetry book 'Birth of Autumn' (which is a bit off from being completed)).

The magazine itself can be read below. There's some excellent stuff in here and I am honored to be in alongside some great writers. (thanks Marie)


Posted by onewriterandhispc at 01:43 No comments: