Pictures from a lovely night Amanda and me went to last night at Gullivers, Manchester called Just Stories 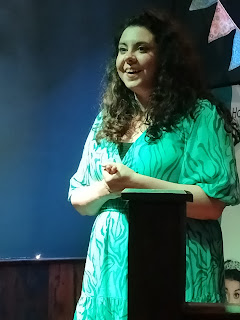 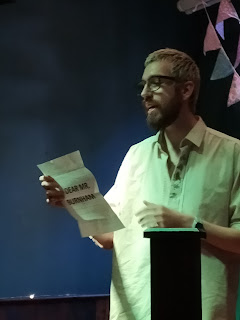 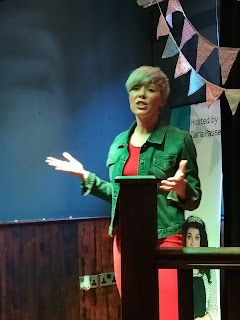 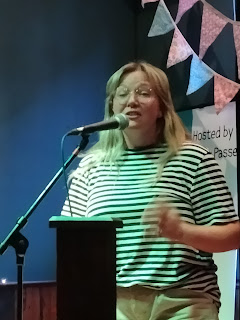 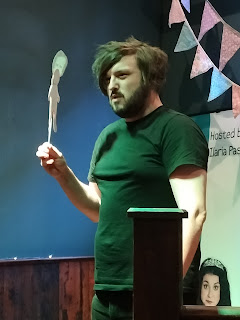 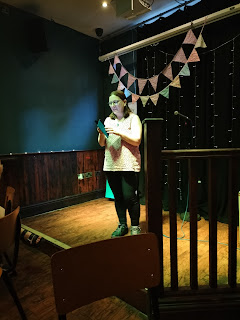 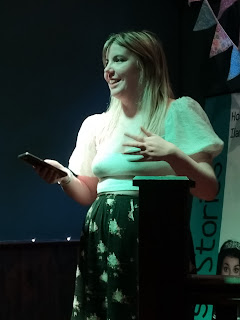 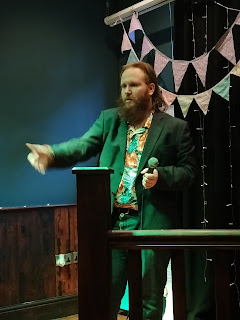 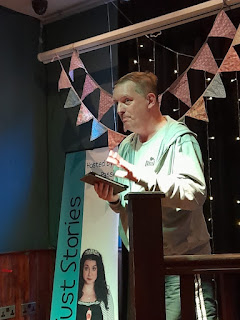 Posted by onewriterandhispc at 12:30 No comments: 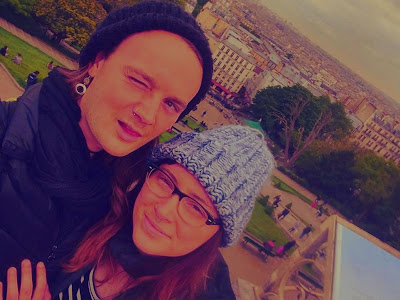 Chelsea Tadeyeske is a poet, performer, and bookmaker from and currently based in Milwaukee, WI. She is the founding editor of pitymilk press where she publishes short-run chapbooks and edits both online and print journals.

Edie Roberts is a multi-disciplinary genderqueer performer and curator living in Detroit, MI.

This can be streamed at:

Posted by onewriterandhispc at 14:28 No comments: 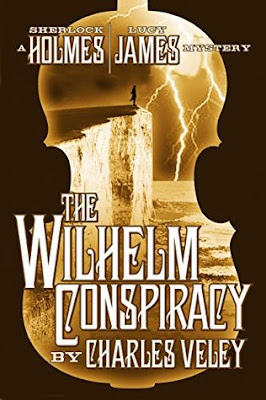 A prominent banker is found dead in an unsavory part of London. Hours later, the charred remains of another body lie on a beach in Dover. Both deaths—and their possible link—attract Sherlock Holmes. Then the Secretary of War summons the detective with catastrophic news whose consequences could harm the nation for generations: on the eve of war, a new British superweapon has fallen into the wrong hands. Holmes must recover it.

Lucy James, an actress and Holmes’s recently discovered grown daughter, has inherited the family sleuthing skills. Despite her father’s objections, she insists on helping him find the weapon and solve the murders. Along with Dr. Watson, they follow the trail to Germany, uncovering a sinister plot that puts them directly in the line of fire. Featuring appearances from real-life notables Nikola Tesla, King Edward VII, and Kaiser Wilhelm II, this electrifying new mystery puts the greatest deductive mind of his era into a race to save the Empire.

First of all, I discovered this series and downloaded the first two books out of interest, but read the second book in error thinking and realised when Lucy was introduced into the book I thought I may as well carry on with this book.

In this ways, this could caused a major problem, but to give the author credit it didn’t jar atall and proved easy enough to read from this book without causing tons of confusion.

I have read some of the original Sherlock Holmes stories from Conan Doyle and did enjoy the way it was shared via the memoirs of Dr John Watson.

The book itself as it was fairly compact seemed to flow along at a fairly good pace if it had gone on for say 400 pages, it would have proved too much and would have lost my interest I think straight away.

The mystery in the book was perhaps slight, and the logic that Ms James shows throughout the book is overdone, but needed to show that was she was her father’s daughter.

A few things, as above the use of Ms James in the book does take away from the two main characters where it felt bringing her into the book had to give her something to do or be involved in the plot more I did feel sometimes and found her sometimes a 21st century woman more in a narrative from the early 20th century.

If anybody is looking for a detailed mystery, I worked out who the villian (s) were by about the halfway stage of the book and I am no expect on thriller / mystery books and suspect if my father who does read a lot of these books would have solved the mystery fairly quickly.

Interestingly as a side note too, Telsa one of the main characters in this book was a real life person and also had it is recorded OCD but was not touched on in this book which was a interesting decision at best or badly researched take your pick.

I’ve got other books to read, so whether I would go to read more I am undecided to be honest at the moment, but I did enjoy so it’s got a 8/10.

Posted by onewriterandhispc at 07:47 No comments:

Amanda and Me live at Celebrate Festival, Whalley Range 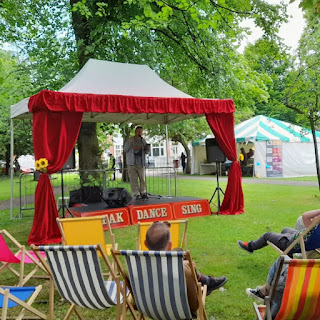 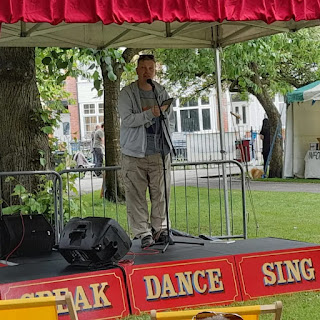 A few pictures off Amanda and myself at Celebrate Festival today, Whalley Range where Amanda read three poems, two about the Gym and one about Medusa on Tinder and I read three flash fiction pieces about Manniquens, Bus stop fights and Alien Invasions. A varied afternoon lol

Posted by onewriterandhispc at 10:27 No comments:

The Birth of Flash Fiction 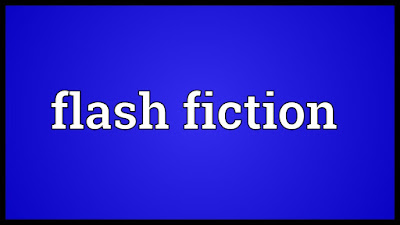 Over the past 18 months if you have seen me read you may have noticed I have slowly being introducing flash fiction slowly more and more into my live sets.

Where this came from is down to my wife Amanda really as when we went into lockdown in April 2020 we decided to set up a online writing workshop to keep ourselves going over that crazy period.

Over the early days of this I wrote a quite bit of poetry and then started branching out into sonnets, tankas and haikus some it has to be said were more successful than others but it gave me chance to use them as a springboard into trying something else.

My first attempt happened in August 2020 by the look of things and it was aborted horror story called the room. It was okay I guess as I remember grasping the mood of the piece I wanted to explore but I got stuck on an ending so I left it open ended and put it away thinking it was fun doing it and that would be it.

Of course this wasn't the case as at another workshop around a month and a half I ended up writing another piece, this time a cheerful Christmas piece called unexpected Christmas present which shocked more than a few people with the use of the f word and one very crude sexual reference to father Christmas but also made a few people laugh.

Into 2021 I began to brush up my taste for short fiction and flash fiction with a few true life short stories / flash fiction and by the time we were able to return to the live arena with the night me and Amanda corun with our friend Steve 'speak easy' and not long after that won 3rd prize for a major horror story competition for a prose piece 'winter and only winter' , I had managed now to take my work full circle with my flash fiction adding a odd element to my work which is perfect fit for my often more serious technical image based poetry.

Unlike my poetry which are always mapped onto folders of possible books, if I ever do with my flash fiction it will be sometime off I can admit as it took years and years before I felt was the case with my poetry and has rebooted my love of performed spoken word.

In the meantime, it's proved a real surprise getting third prize in competitions I would never would have dreamed entering a few years ago, showed people I don't just liking in one style and as I proved in a recent writing workshop Amanda and me were at I can surprise myself with flash fiction completing a piece in 15 to 20 minutes in a style the writer off me 4 years ago wouldn't have dreamed attempting.

It's a important thing for all writers to bear in mind. I had really being a poet for many, many years ago and since meeting my wife, Amanda

Posted by onewriterandhispc at 18:00 No comments: 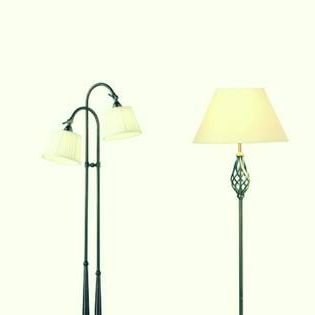 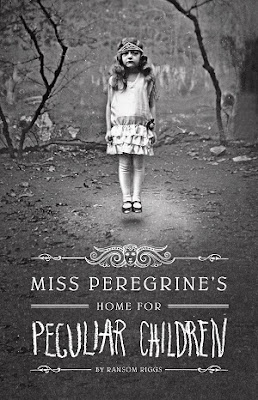 * Audio version of this review will appear on the Book Review Podcast - Reading in Bed at the start of June (readinginbed.bandcamp.com)

A mysterious island. An abandoned orphanage. A strange collection of very curious photographs. It all waits to be discovered in Miss Peregrine's Home for Peculiar Children, an unforgettable novel that mixes fiction and photography in a thrilling reading experience. As our story opens, a horrific family tragedy sets sixteen-year-old Jacob journeying to a remote island off the coast of Wales, where he discovers the crumbling ruins of Miss Peregrine's Home for Peculiar Children. As Jacob explores its abandoned bedrooms and hallways, it becomes clear that the children were more than just peculiar. They may have been dangerous. They may have been quarantined on a deserted island for good reason. And somehow-impossible though it seems-they may still be alive. A spine-tingling fantasy illustrated with haunting vintage photography, Miss Peregrine's Home for Peculiar Children will delight adults, teens, and anyone who relishes an adventure in the shadows.

The story is told through a combination of narrative and a mix of vernacular and found photography from the personal archives of collectors listed by the author and also a film from Tim Burton (which did okay from what I understand but not well enough to warrant a sequal or sequals).

The book itself has a interesting idea behind where reading up on the book, it was originally intended to be a picture featuring photographs the Author Riggs had collected, but he was advised from a editor as a guide to put together a narrative. The result was a story about a boy who follows clues from his grandfather's old photographs, tales, and his grandfather's last words which lead him on an adventure that takes him to a large abandoned orphanage on Cairnholm, a fictional Welsh island.

The book does have great atomsphere and I felt like the Author knew Wales when Jacob went there and the setup was great when Jacob’s grandfather reveals certain aspects of his life to them before then meeting his own fate and the use of the other children, which could have easily span into young X Men territory easily did work.

Too slow moving if I am honest and the book fell flat around the 200 to 250 page mark for me and didn’t recover for me and was nowhere as creepy or weird as the hype I’ve read it was.

The use of the pictures frequently throughout the book don’t fully work for me and in places the pictures which in the first half kinda worked in the 2nd half, it started to feel like the author either ran out of ideas or got tangled up in the world he was creating and wrote himself into a corner.

The film version of this which I have seen I think was far from perfect, but felt a lot more clearer and cut out a lot of the fat and confusing sub plots that were littered throughout this book.

A shame as it got off to a good start, but I can’t recommend this because of what happened in the 2nd half of the book – a better editor would have helped the book not fall off the edge of a cliff which is what happened to me during the last 100 – 150 pages of this book.

Posted by onewriterandhispc at 07:45 No comments: